skip to main | skip to sidebar

Why do we have two ovens? 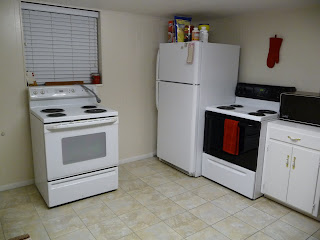 Let me tell you the story...
A long time ago... (ok maybe not so long ago) we moved in to an apartment in far away Provo....

So we moved in to this great little basement apartment here in Provo a little over a year ago. Well, see the black oven in the picture above? Well the poor thing has had issues.
It has never worked for us quite right. I tried to cook pizza, muffins and other such things and it always burnt the bottom or took way longer than called for.
We finally figured it out when we cooked lasagna for the first time.
THE TOP ELEMENT NEVER WORKED.
We reported it to our land lord the next time we saw them.

A little while latter, Matt decided he was going to fix this problem. He took the oven apart and made sure it was the element (which looked fine and dandy by the way). So we took it to Lowes, they don't carry it anymore... the Mending Shed, they don't either... Online... close to $200 dollars. So we decided to leave it up to the owner to fix.

In the mean time, this fatastic toaster oven has become our new best friend over the last several months.
I cooked everything we ate in this little oven or on top of the stove that only partially worked. 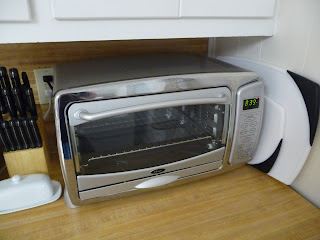 Anyways, time passed and we decided to remind the owner that it still didn't work.
So here's the story....

One Saturday morning we get a knock on the door. I had just gotten out of the shower, so I lock myself in the bedroom to get ready while Matt gets the door. From the bedroom I hear them getting our tools and such and it sounded like they were taking apart the oven. By the time I am all ready I come out of the room to find them cleaning up all the tools and closing up the oven.

The power was on, the old element was in the guys hand, and matt was putting away his tools. So, I figured they had just replaced the element. I was pretty excited about it!
I said something like "Oh we should make sure it works before you leave!"
So I went and pushed the 'Bake' Button ......
POOOOOFFF
Their went the power and electrical. OH NO!
Matt comes back in the room and says "NAT!!!....."
We open the oven door and a little puf of smock comes out.
I just blew up our oven.

They really hadn't replaced the element, but had just taken the old one out.
But now we had an even bigger problem.
THE ENTIRE OVEN DID NOT WORK! Thanks to me!

So a week later after some microwave meals, we get an offer from our sweet neighbors in Alpine who just happen to be remodeling their house and were in need of dumping an old oven.
Matt jumped at the offer and we went to go fetch our new oven.

We (well Matt and my brother) haul it into our apartment (which mind you is not an easy task. We have narrow steep stairs just before entering our door and the kitchen is in the back.) Anyways, we go to plug it in and ......who knew that oven's have different plugs. It was a 3 prong instead of the 4 prong outlet we had. So now we have two useless ovens in our little kitchen. :)

Well the truth about the story is, we were extremely blessed. Matt told the guy the whole story about how I blew up the electrical by pushing a button.... The guy acted surprised and said that shouldn't have happened. And quite frankly, we were pretty lucky it hadn't started a fire!
I think someone in Heaven is watching over us! 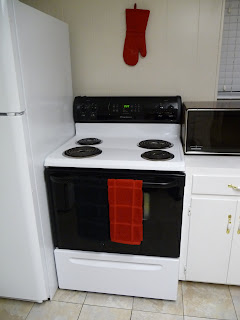 We couldn't be happier to have a working oven!
I'm not sure if I am more happy to cook again, or if Matt is more excited to Eat again!

The other morning we woke up to this! It looked absolutely beautiful! There is just something cozy and wonderful about waking up from a warm sleep to a fresh white Winter-land of snow like this! 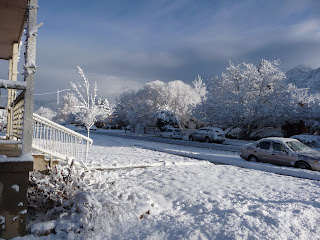 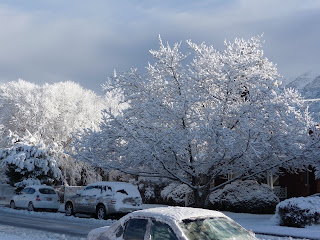 Would have loved to be skiing with Ange, Em, and Nate!
(I was a bit jealous... I admit) 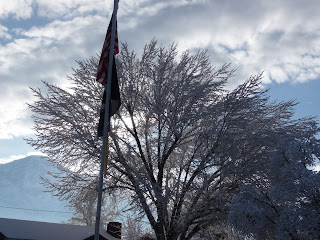 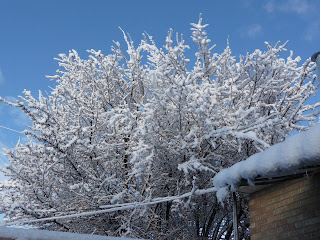 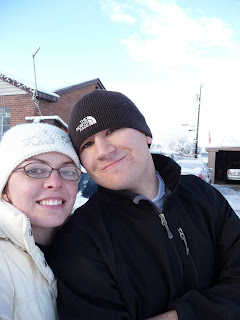 Yes, we live in the basement of this quaint little house! We love it! 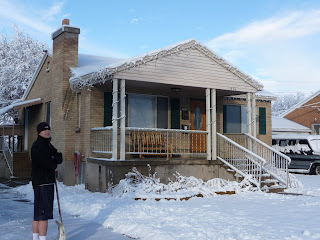 Matt is a fantastic snow shoveler!
I think shorts and cold must be a Vegas thing. ;)
Do they still wear shorts with Ugg boots down there?
Posted by Dixons at 6:22 PM 2 comments:

Thanks for stopping by!